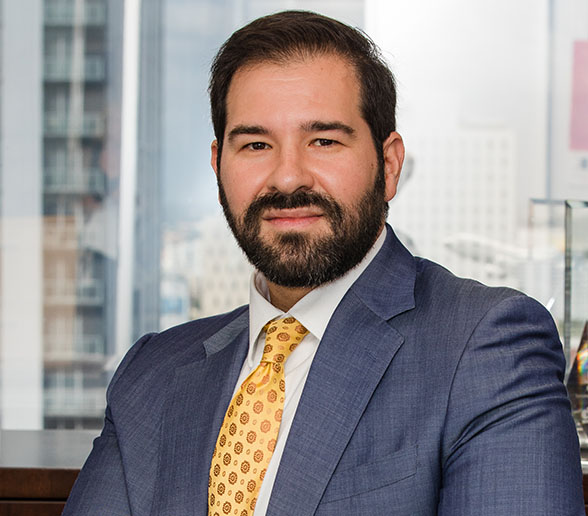 Ricardo M. Martinez-Cid is a partner at Podhurst Orseck, P.A., in Miami. He earned his undergraduate degree in only three years at the University of Miami (B.A. cum laude 1997) and his Juris Doctorate at Yale Law School (J.D. 2000) where he was the William S. Beinecke Scholar. While a law student, Ricardo was a director at Yale’s renowned clinical program. He served on the Board of Directors of the Latino Law Students Association and was an editor of The Yale Journal of International Law. Before joining the firm, Ricardo served as a law clerk to the Honorable James Lawrence King on the United States District Court for the Southern District of Florida. He joined the firm in 2002 and was named a partner in 2005.

Ricardo is an accomplished trial lawyer, having obtained multi-million-dollar verdicts on behalf of his clients in both federal and state courts. He currently serves as court-appointed lead counsel for all wrongful death and personal injury claims arising from the Champlain Towers building collapse in Surfside, Florida. He also serves as court-appointed leadership counsel for the plaintiffs in In Re: Ethiopian Airlines Flight 302 and on the In Re: Zantac Litigation MDL. He has been named “Legal Elite” by Florida Trend Magazine, “Top Lawyer” by Expert Guides, the South Florida Legal Guile, and “Super Lawyer” by Super Lawyers Magazine. He was selected by his peers for inclusion in The Best Lawyers in America. According to the National Law Journal, his verdict of over 195 million dollars in the Fondo Vision natter was one of the ten largest jury verdicts of 2010. The Daily Business Review has recognized him multiple times at its Most Effective Lawyers’ event.

Much of Ricardo’s practice involves personal injury, wrongful death, and product liability cases with a focus on mass torts, class actions, and aviation litigation. He is experienced in Multi-District Litigation and currently serves on the Plaintiffs’ Executive Committee for the NFL Concussion Litigation and the Plaintiffs’ Executive Committee for the Ethiopian Airlines Flight 302 Litigation. Ricardo also handles select commercial matters.

In 2017, he was nominated to the International Society of Barristers. The Society is based at Duke University School of Law. Membership is by invitation only and is proceeded by a rigorous screening process that considers the lawyer’s ability, experience, accomplishments and ethical standards as assessed by trial lawyers and judges. He is also a member of the American Board of Trial Advocates, an invitation-only association of experienced trial lawyers and judges.

Ricardo has authored and published works for the American Bar Association, the Westlaw Journal, and other periodicals. He is a frequent lecturer on handling complex litigation and general trial tactics. He has also served on the faculty of the Al J. Cone Trial Advocacy Institute.

He is fluent in English, Spanish, and Portuguese.

Ricardo was recently interviewed by LAW360.