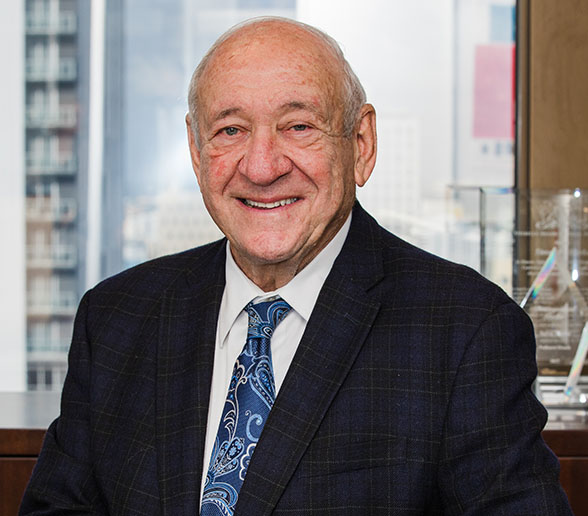 Bob is one of Dade County′s premiere trial lawyers. He has been listed annually since 1987 in the Best Lawyers in America in two categories–Business Litigation and Criminal Law since 2003 and from 2003 he has been listed in Chambers and Partners as one of the top four commercial litigators in Florida. In 2006 he was listed #1 trial lawyer in Florida by Super Lawyers. He has received the Dade County Bar David Dyer Professionalism Award, the Bnai Brith Professionalism Award, the Florida Defense Lawyers Rodney Thaxton “Against All Odds”award, the American Bar Association Senior Section Pro Bono Award , the Florida Bar Tobias Simon Pro Bono Service Award in (2009-2010) and the Florida Bar Foundation’s Medal of Honor Award 2013.

In 2012, he was awarded the Florida Bar Criminal Law Section’s Selig I. Goldin Memorial Award, the Greater Miami Jewish Federation Theodore “Ted” Klein Special Recognition Award, named as one of the Top 100 Trial Lawyers by the National Trial Lawyers organization, inducted to the Trial Lawyer Hall of Fame and named a Public Justice Trial Lawyer of the Year finalist for outstanding contributions to the public interest through his work in the Checking Account Overdraft Class Action litigation.

He is Past President and Dean of the International Academy of Trial Lawyers, a fellow and state chair of the American College of Trial Lawyers, a fellow of the Litigation Counsel of America, Trial Lawyer Honorary Society, Past–President of the Peter T. Fay American Inns of Court and a member of the American Board of Trial Advocates. He has served on the American Bar Association Standing Committee on the Judiciary, as Chairman of the Southern District of Florida Judicial Evaluation Committee, served as a member of the Florida Federal Judicial Nominating Commission and the Florida State University Law School Board of Visitors. In addition to extensive involvement in the firm′s commercial practice, Bob handles the firm′s white–collar criminal defense work––an outgrowth of his background as an assistant U.S. Attorney for the Southern District of Florida, as Special Counsel to the Dade County Grand Jury, and as a member of numerous commissions and task forces in the area of criminal law, including the U.S. Supreme Court Advisory Committee on Criminal Rules and Chairmanship of the Florida Bar′s Criminal Law Certification Committee. He served as General Counsel to Governor Robert Graham in 1980. Bob has lectured extensively throughout the United States on substantive issues, ethics, professionalism and civility. His 1994 article on civility has been reprinted in more than 20 legal journals and periodicals. Bob is extensively involved in community activities, with particular emphasis upon the prevention of drug and alcohol abuse by young people.